The global M&A market should stay very busy in the second half of 2021, leading to new peaks for deal value. Year to date, total deal value is on a record pace amid the economic recovery, benefiting from the resumption and completion of M&A processes put on hold during 2020. In the second half of the year, the increased supply of attractive targets caused by the pull-forward effect of anticipated tax changes will continue to fuel incremental M&A activity. In addition, well capitalized corporates and financial sponsors have the means and motivation to tap into the larger pool of available assets as the economic environment improves further. 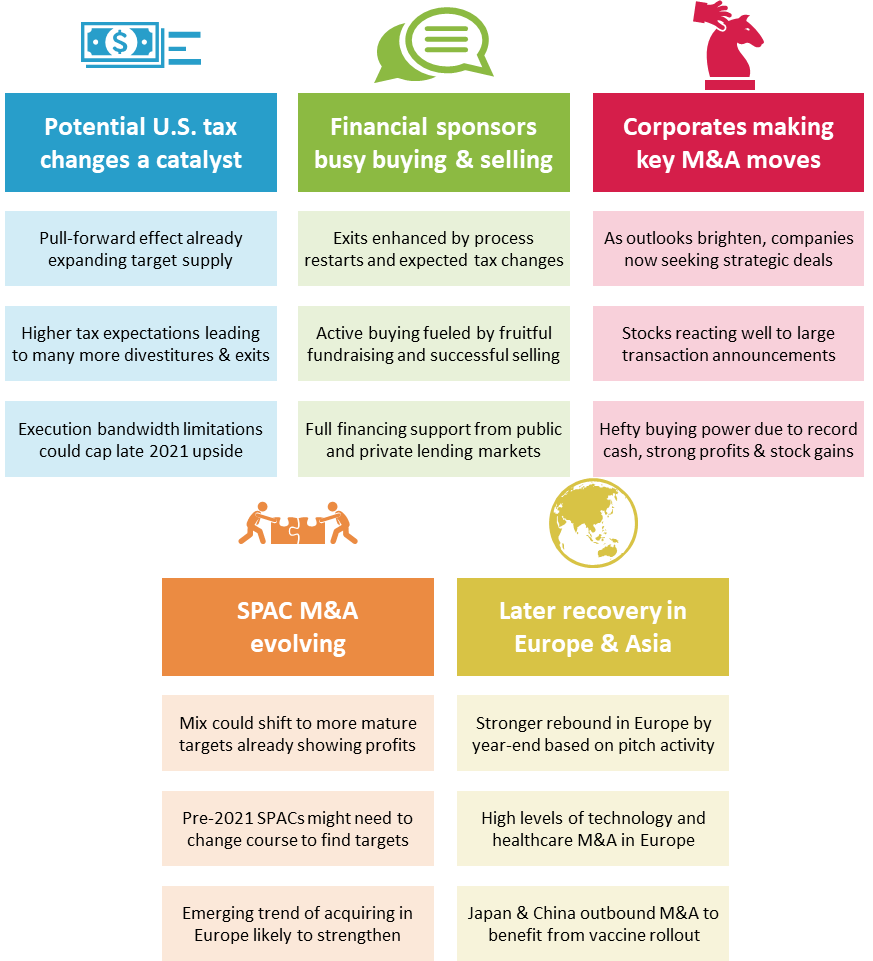 The drivers that we detailed in January have powered impressive M&A results during the first half of 2021, keyed by numerous deferred sale processes restarting as the economy showed signs of rebounding. Before looking at the primary factors impacting activity over the rest of the year, the global M&A market’s stellar YTD 2021 performance should be placed into historical context:

Despite having a tough act to follow, the global M&A market should thrive in the months ahead based on the factors discussed below. 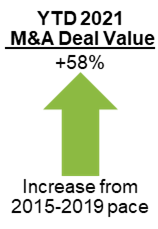 A significant driver of M&A activity in the second half of 2021 will be the larger number of targets available for sale due to likely tax policy changes in the U.S. Anticipated changes with the most impact on the M&A market include:

Although the timing and level of tax policy adjustments is still to be determined, the new tax regime could take effect upon enactment or at the start of 2022, with retroactive changes possibly a part of negotiations.

Many owners have already put holdings on the market based on expectations of tax changes, contributing to strong M&A activity in YTD 2021 and expanding the group of attractive targets seeking new owners before the end of the year. As evidence, the disclosed deal value for U.S. corporate divestitures in January-May 2021 was $430 billion, the highest five-month total in the M&A dataset by a wide margin. (Data in the next section illustrates the rapid pace of sponsor sales in YTD 2021.)

The lift resulting from the larger supply of businesses available for sale could be mirrored by a dip in M&A activity during 2022. This stands to reason based on the market dynamics we are currently seeing as deals are pulled forward from future years. A drop-off would be consistent with the experience of 2013, the last year with an increase in the U.S. capital gains tax rate. Despite the uncertainty of the 2012 presidential election, the potential for higher taxes factored into the monthly average deal count for the second half of 2012 exceeding the 2013 mean by 27% in the U.S.

Financial sponsors will continue to play a central role in the M&A market during the balance of 2021 after a hectic first half. In the U.S., sponsors have been extremely active as sellers due largely to the tax considerations noted above. In the first five months of 2021, the number of U.S. targets sold by private equity firms was 18% above the pace of 2015-2019, while disclosed deal value was 187% higher.

On a global basis, additional dynamics have contributed to robust levels of selling by private equity firms this year. The resumption of many processes forced to pause in 2020 due to COVID has expanded the number of viable targets, with the improved economic outlook increasing the confidence of strategic and sponsor buyers for these assets. The number of non-U.S. targets with a sponsor seller in January-May exceeded the 2015-2019 run rate slightly, and the average monthly disclosed deal value for this group rose 36%. 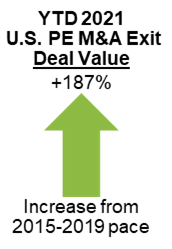 Sponsors are well positioned to capitalize on the larger target supply. Several factors are currently contributing to the major buying capacity of private equity firms:

After facing economic headwinds for most of 2020, corporate leaders have regained M&A appetites during 2021 based on strong conviction in their business outlooks. Accordingly, companies have aggressively pursued the robust target supply. On a global basis over the last three months through May, strategic acquisition activity with disclosed value of $200+ million increased 14% relative to the average 2015-2019 pace, with deal value for this segment rising 41%.

Investor responses to this year’s larger M&A transaction announcements have been largely favorable. In YTD 2021, the median of post-announcement stock moves for U.S. acquirors in $500+ million deals (i.e., transactions large enough to warrant investor reactions) was roughly twice as positive as during the five years before COVID. With many notable transactions meeting the approval of investors in recent months, additional management teams could be persuaded to follow through on M&A ambitions during the second half of 2021.

Corporates have the buying power needed to participate fully in the M&A market over the rest of the year.

While SPACs contributed to the M&A market’s impressive performance to date in 2021, we are not as optimistic about their impact over the rest of the year. Of the nearly 600 SPACs that have come public since the start of 2020, more than 400 are still searching for an M&A target. In addition, another 200+ SPACs have filed for an IPO. In view of this, one might expect sustained strength in SPAC M&A through year-end. However, SPAC market conditions have chilled due to pressure on post-merger stock prices, tighter PIPE markets, and timing delays associated with shifting reporting requirements for SPAC-related warrants. 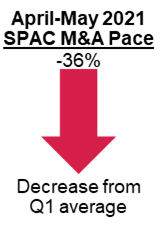 We expect SPAC M&A activity to evolve during the second half of 2021 and beyond.

While the dynamics described above apply to the full extent for sponsors and corporates based in the U.S., additional considerations are relevant in Europe.

Europe’s M&A recovery has been strong in certain sectors but slower to develop in other segments, with acquired targets typically demonstrating resilience during the pandemic.

Targets with cyclical characteristics and/or continued drag from COVID in Q1 2021, given deeper and more widespread lockdowns in Europe (relative to the U.S.), are delaying sell-side processes until the second half of the year. In addition, some buyers and lenders are naturally taking a more skeptical view of COVID addbacks than sellers, increasing the importance of delivering solid post-COVID performance for a meaningful period.

As demonstrated by the above points and the gradual loosening of COVID restrictions in Europe, late 2021 and beyond are setting up for a strong M&A rebound across sectors.

Japan and China are among the largest single-country contributors to global M&A activity, with cross-border transactions involving entities based in these nations of particular interest. However, since the early stages of COVID, potential buyers from Japan and China have typically struggled to engage in competitive M&A processes in the U.S. and Europe. 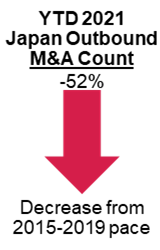 In China, we anticipate stronger cross-border activity in the second half of 2021 than in the first half, as vaccination distribution proceeds and business travel continue to recover.

Although the pieces are in place for an excellent second half in the M&A market, several issues could cap the upside to overall results late in the year.

We encourage you to contact Baird’s Global M&A team to discuss your M&A plans for the remainder of this year and beyond.