Will SPACs Succeed in Europe?

Whether listed in the US or Europe, SPACs are now potential acquirers of European targets

US listings of special purpose acquisition companies (SPACs) are continuing at a new record rate in Q1 2021 after a record 2020, while European listings of SPACs are still at an early stage.  The SPAC asset class has proven itself as a mainstream alternative to a traditional initial public offering (IPO) for private companies to go public and access capital to support future growth.  There were 44 SPAC mergers announced in February 2021 accounting for 3% of global M&A deal count and a record 30% of disclosed deal value.

With 407 US SPAC IPOs raising $118bn searching for acquisitions, they are also now a key potential buyer group for non-US targets.  Institutional investor demand for US listed SPACs with a non-US target focus has been strong.  Investors are looking for exposure via a SPAC structure to deal flow in different geographies, including Europe, the Middle East and Asia.  In this article, Baird discusses the outlook for SPACs, whether listed in the US or Europe, as it relates to European M&A.

We have SPAC buyer involvement in the majority of our US M&A sell-sides and are now seeing a number of our European clients being approached by SPACs, primarily those listed in the US.  Baird can guide clients through their various options when receiving inbound interest from SPACs – please contact us to discuss.  Baird Global Investment Banking is an experienced partner to companies seeking equity financing or M&A solutions, with recent mandates advising SPACs on their initial public offering and acquisition (de-SPAC transaction) as well as advising targets on their SPAC merger and follow-on offerings.

What is a SPAC and why are they popular?

Also known as “blank cheque” companies, SPACs are formed to raise capital through an IPO for the purpose of merging with an existing company.  The SPAC has a finite amount of time to search for and acquire a target, typically two years.  The capital raised is placed in trust and can only be used to purchase a target company or, if the SPAC cannot complete a transaction in time, returned to its investors.  US listed SPACs have significantly reduced the time to announce an acquisition, from an average of 17 months pre-2020 to 5 months in 2020.

SPACs typically have a sector or thematic focus, determined by the management sponsor team whom investors place their trust.  The “sponsor” can also be private equity firms, such as AEA-Bridges, Gores, Investindustrial, Thoma Bravo and TPG, that have SPACs of their own.  High growth sectors such as software, mobility and healthcare are popular as well as new industrial technologies driven by environmental, social and governance (ESG).  SPACs can provide significant growth capital for pre-revenue companies such as new electric vehicle or clean battery makers. 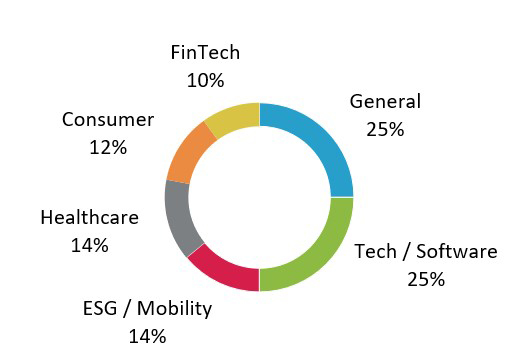 The majority of US SPACs currently pursue capital raises of $200m – $400m.  Including the stock roll, the enterprise value offered by SPACs can be $500m – $10bn+ when supported by debt financing and anchored by follow-on equity transactions called PIPEs (private investment in public equity).  SPACs are becoming more institutionalised in the US and in many cases represent a viable and attractive alternative to a traditional IPO or M&A sale transaction.  An M&A sale of a target still represents the quickest and most efficient route for selling shareholders looking for a majority exit.

Considerations of SPAC merger vs. alternatives

Plentiful US listed SPACs, some with a European mandate

Over 35% of the 219 filed SPACs are backed by a sponsor management team which has previously listed a SPAC.  Repeat SPACs are arguably more attractive to both investors and targets if the sponsor has a track record of navigating the de-SPAC process and producing value for investors.  Repeat SPAC sponsors also often have pre-existing relationships with institutional investors and potential PIPE investors, which fosters deal certainty and the ability to execute cross-border acquisitions. 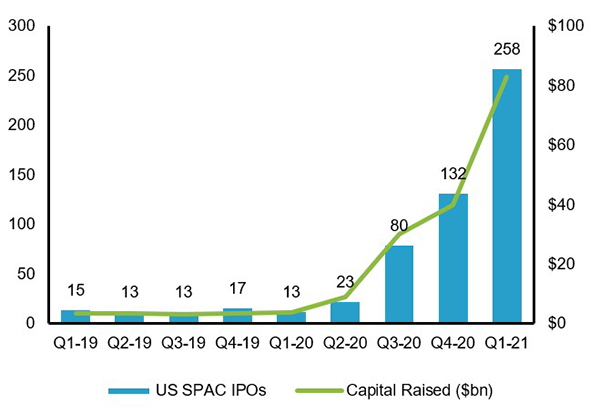 Source: SPACInsider as at mid-March 2021.

Some market commentators believe this level of issuance is unsustainable, while others believe SPACs are here to stay, taking advantage of the depth and liquidity of the US capital markets.  Despite fears of an oversupply of SPACs, many of these listings were in excess of 10x oversubscribed.  Strong institutional investor demand for US listed SPACs continues.

Relative to prior years, the market is now more diverse with higher participation in SPACs from different types of investors.  For example, retail investors are taking interest, now accounting for 40% of trading in US listed SPACs.  Obtaining votes from thousands of retail investors can delay the process for SPACs seeking majority shareholder approval to complete an acquisition.

20% of the 506 SPACs that IPO’d in 2020 and YTD 2021 have announced or completed their merger with an acquisition target, at least 5 of which are headquartered in Europe (see table 1 in Appendix).  The remaining 80% are searching for their initial business combination, at least 10 of which are specifically focused on Europe while many of the others have global mandates.  As more SPACs continue to list in the US, they are an increasingly powerful buyer group in M&A processes, not just for US targets but also for European targets (see table 2 in Appendix). 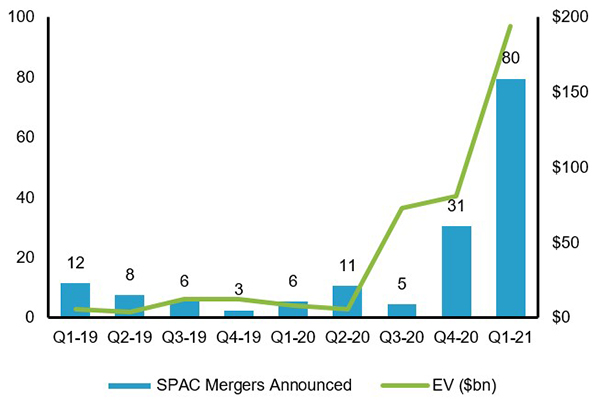 Source: SPACInsider as at mid-March 2021.

Of the 219 SPACs that have filed to IPO as at mid-March 2021, at least 10 are focused on Europe and at least 5 on Asia.  Management sponsor teams based outside the US are taking advantage of this investor appetite for SPACs as well as the potential for high publicly traded valuations on US stock exchanges.  With an abundance of US listed SPACs chasing a limited number of US targets, the European target opportunity set becomes more compelling.

The UK and Italy were historically the most active European listing locations with 19 sizeable SPAC IPOs in 2017 and 2018.  However, only 2 SPACs were listed in the UK and Italy since January 2019.  The Netherlands and France are now increasingly active listing locations (see table 3 in Appendix).  In recent years, 6 SPACs listed on Euronext Amsterdam and 2 on Euronext Paris.  The first SPAC in over a decade on the Frankfurt stock exchange listed in February 2021 and the first SPAC on the Nasdaq Stockholm is planned to IPO in March 2021.  Some European stock exchanges are revising their listing rules to attract new SPACs given the recent ramp up in the US.

The UK Listing Review, published in March 2021, recommends liberalising the rules for UK listed SPACs and safeguarding investors.  Changes, which could be implemented by the end of 2021 include “revising the rule to require trading to be suspended in the shares of SPACs on announcement of a potential acquisition” and “providing additional protections for shareholders at the time of the acquisition, such as a shareholder vote and redemption rights.”  This would improve the attractiveness of UK listed SPACs, narrowing the existing gap between listing in the UK and US.

Nasdaq Nordic introduced a new framework for SPAC IPOs on its Stockholm exchange in February 2021 – trading in SPAC shares will not be stopped once an acquisition is announced, so that investors can sell out if they do not approve of the merger deal.  A Stockholm listing provides a SPAC with 3 years to complete an acquisition, instead of the typical 2 years, giving the sponsor management team more time to find an attractive target.

Amsterdam is likely to be a popular listing location for European SPACs, supported by similar rules to the US that allow investors to pull their money before or after the merger target is announced.  Amsterdam is also benefitting from the UK’s exit from the EU, overtaking London as Europe’s largest share trading centre in January 2021.  If one recent or upcoming European listed SPAC trades well post-acquisition, we will likely see an acceleration in SPAC listings.

We expect sizeable SPAC merger activity in Europe to increase from less than a handful deals annually to over a dozen in 2021.  While this would represent substantial growth, it remains a small proportion of European M&A activity.  As European stock exchanges adjust their listing rules to be more SPAC friendly, European based management sponsor teams will increasingly choose to list in Europe rather than the US.  We therefore expect SPAC listings in Europe to accelerate from H2 2021, but will not reach a level near that of the US.  The US is a large homogenous market and benefits from a deep pool of institutional investors and relatively high public company valuations.

More European sell-side processes will be run differently, particularly for privately owned companies valued over €500m with the required level of governance and financial controls to operate as a publicly listed entity.  Instead of dual track processes comprising the M&A sell-side track and IPO track, we will see more dual track processes comprising the M&A sell-side and SPAC merger as well as triple track processes that feature all exit options.  However, we still expect most mid-market companies with shareholders that wish to exit, be more suited to a strategic buyer (offering synergies and cross-selling opportunities) or a private equity firm rather than a SPAC merger.

It is too early to answer the title of this article “will SPACs succeed in Europe?”  Raising money through SPAC IPOs is just the first step; the real outcomes depend on whether or not the sponsor management teams can find and successfully invest in high quality companies.  As we monitor the share price performance of these newly public companies over the coming months and years, we will see if the majority of SPAC mergers are success stories.

Article sources include Baird analysis of company press releases, SPACInsider, Dealogic and CapIQ as at mid-March 2021. 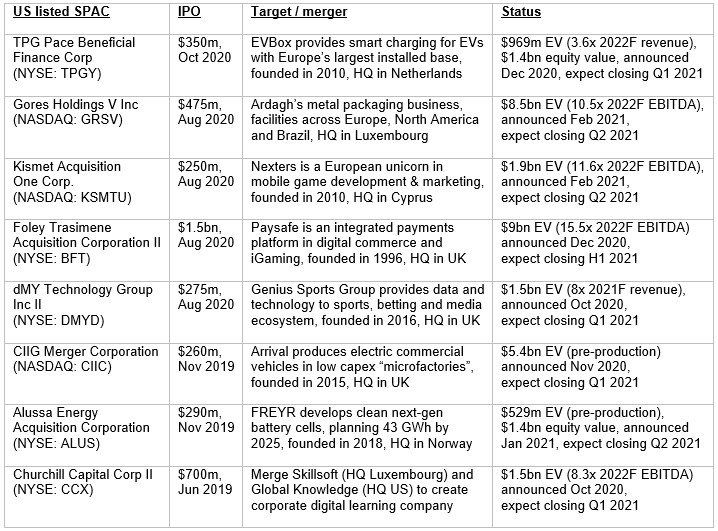 Source:  Company press releases, SPACInsider, Dealogic and CapIQ as at mid-March 2021.  Only includes SPACs that raise over $30m.

Table 2 – selected US listed SPACs searching for a European target 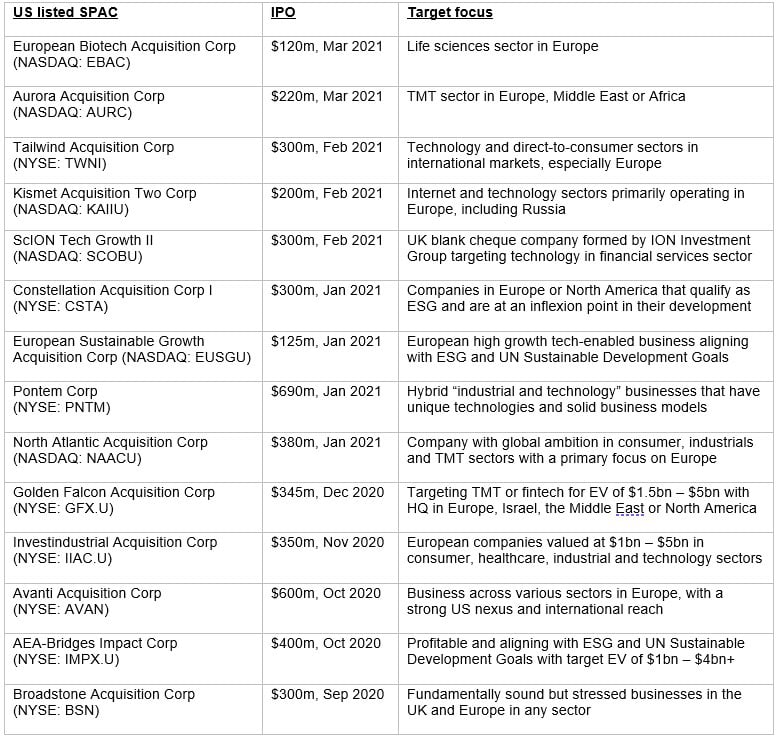 Source:  Company press releases, SPACInsider, Dealogic and CapIQ as at mid-March 2021.  Only includes SPACs that raise over $30m. 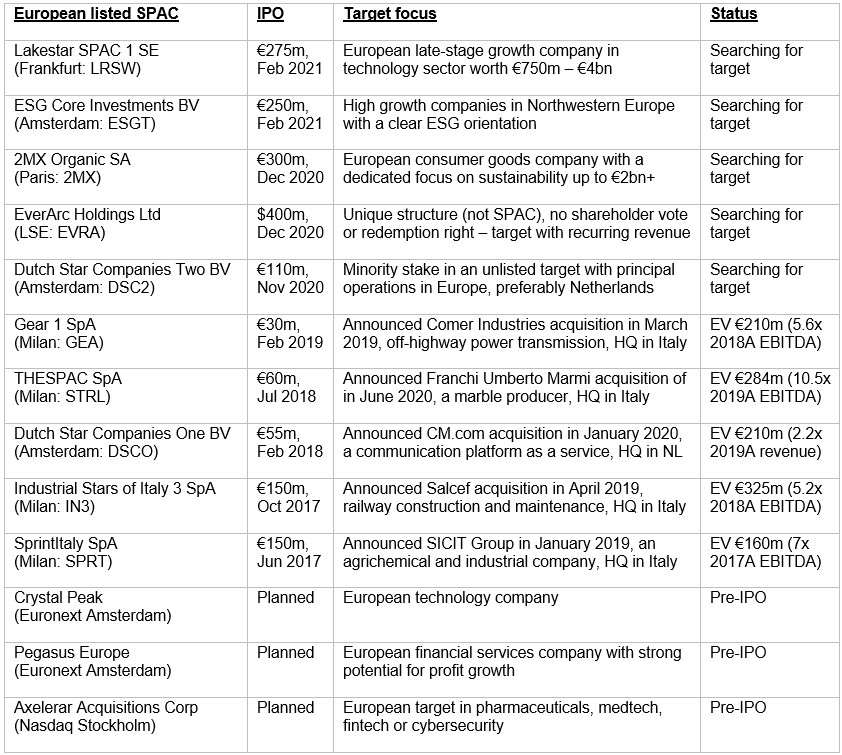 Source: Company press releases, SPACInsider, Dealogic and CapIQ as at mid-March 2021. Only includes SPACs that raise over $30m.