Baird expects strong M&A activity in 2021, building on the recovery experienced in the second half of 2020. Leading drivers of broader acceleration in the M&A market should include the abundant supply of targets, renewed M&A demand for corporates and sponsors with access to significant and growing amounts of capital, as well as incremental deal activity from SPACs, with all of these enabled by faster process execution. Tailwinds for M&A activity also include the macroeconomic backdrop, which is widely anticipated to improve throughout 2021 based on the distribution of vaccines across the world. 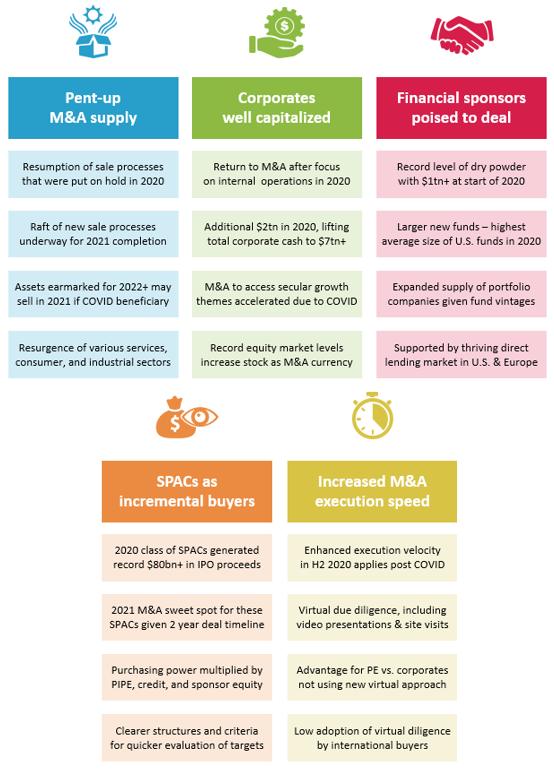 The level of deal activity in the first half of 2021 and possibly beyond will be boosted by the large number of targets that were not sold last year as originally planned. The latter part of 2020 witnessed the resumption of numerous sale processes that were put on hold during the early stages of COVID. The current M&A pipeline also includes processes initiated only recently, resulting in an ample supply of available targets while the market continues to absorb previously paused engagements. We expect the supply overhang caused by last year’s deal vacuum to translate to sustained strength in M&A in the near term as buyers that moved to the sidelines in 2020 capitalize on plentiful opportunities.

Historically, an expanded supply of sponsor portfolio companies for sale has been an excellent leading indicator of an M&A upturn. As detailed in our July 2020 piece, large growth in the number of deals with private equity sellers in the late stage of an M&A downturn bodes well for broader strength in the M&A market in subsequent months. During Q4 2020, the monthly average deal count for private equity M&A exits doubled versus the prior six-month mean in the U.S. while rising 76% in Europe. In contrast, the monthly pace of overall M&A activity in the last three months was similar to the average of the preceding six months. The prospects of healthier conditions ahead, as indicated by recent data and as implied by increased valuations in the public equity markets, have caused PE firms to re-engage many previously delayed sale processes, lifting the supply of targets.

We are seeing an increased appetite for M&A among buyers, particularly in the form of larger acquisitions, which is a positive sign for a widespread M&A market recovery. As noted in the July 2020 article, the tail end of past downcycles also featured waves of deals with disclosed values of $200+ million ahead of improvement in the overall M&A market, as strategic and sponsor buyers were ready to pursue prized assets once sensing a more competitive M&A environment. Larger deal activity has surged upward recently; in the U.S. and Europe combined, the average number of $200+ million deals announced in Q4 2020 was more than twice the mean of the previous six months. Based on the historical leading indicators noted above and the factors described below, the pieces are in place for strength in M&A activity across deal sizes in 2021.

Heightened demand in 2020 for targets with appealing profiles should continue this year even as the M&A environment improves further. Valuation multiples bifurcated for M&A transactions last year, as many buyers were willing to pay premiums for high quality, COVID-resilient businesses or for targets projected to benefit over the long term in a post-COVID world, whereas some sellers were forced to divest relatively distressed assets at low valuations. During 2021, we expect robust demand for the best assets to continue to support strong M&A multiples, in particular for high growth subsectors.

Corporates have the means and motivation to prioritize M&A in 2021. We expect acquisitions to return to the top of company agendas in the new year after the COVID pandemic required focus on internal operations for much of 2020.

Hefty stores of capital are available to corporates seeking to resume a proactive approach to their M&A pipelines in 2021 due to last year’s focus on building and preserving liquidity. After gradually building the cash levels on their balance sheets during the 2010s, corporates added nearly another $2 trillion of cash last year, lifting the aggregate total to over $7 trillion. Factors in 2020’s outsized cash haul included:

The events of 2020 strengthened the case for corporates to participate in the M&A market. Over the next year, we expect to see numerous deals that add technology or specified market access in an attempt to improve competitive positioning and to participate in secular growth trends that accelerated due to COVID. In addition, the rationale for transactions may include reducing cyclicality, combatting COVID-related disruption to the business or industry, and consolidating or divesting assets in challenged sectors.

As evidence that companies are already being opportunistic, corporate acquirors based in Europe and Asia have taken advantage of the relative weakness of the U.S. dollar in executing on cross-border M&A strategies. Among European corporate acquisitions of U.S. targets with disclosed value of $200+ million, Q3 2020 and Q4 2020 posted the highest quarterly deal counts since Q4 2007. Also during Q3 and Q4, Asian corporate M&A into the U.S. generated the most disclosed deal value in the past 15 quarters.

Private equity firms are primed for a much busier year of transaction activity, with plenty of accessible capital for platform and add-on M&A after a slower pace of purchases for much of last year:

SPACs represent another large pool of capital that will be geared toward the M&A market this year. As a headlining phenomenon for most of 2020, SPAC IPO activity picked up during the early stages of COVID and gained steam throughout the upturn in the equity markets. The 2020 class of SPACs generated a record $80+ billion in IPO proceeds, and most entered this year still on the hunt for targets with suitable profiles. We expect 2021 to be the M&A sweet spot for these SPACs, which generally must complete an M&A deal within two years of the IPO. In view of many public equity multiples near historic highs, the premium above private market valuations should help SPACs close deals with attractive targets seeking to become publicly traded by merging with a SPAC.

SPACs have purchasing power that extends well beyond their IPO proceeds, facilitating transactions of scale. The M&A capacity of SPACs is multiplied by their ability to raise committed PIPE capital. In addition, SPACs can access the credit markets to secure M&A financing once a target is identified, helping these entities punch above their weight in terms of deal size. Certain SPACs can also undertake a larger transaction via equity contribution from a backing sponsor.

With momentum for SPACs carrying into 2021, additional SPAC IPOs in the early part of the year would further enhance the near-term M&A environment. Given low interest rates and strong investor interest in higher-growth businesses, we expect more investor capital to flow to SPACs, which have become increasingly mainstream and institutionalized, with participation by well recognized sponsors and high-profile individuals. In addition, based on improvements to their structures, the latest generation of SPACs has been much more successful in consummating a business combination prior to the expiration date, thereby increasing their appeal with investors.

We expect many of the sell-side M&A playbooks and process changes that enhanced execution velocity in the latter part of 2020 to apply beyond COVID, thereby expanding the deal-making capacity of the M&A market in 2021. Since last spring, social distancing and travel limitations have forced deal participants to implement various strategies and tactics in conducting sell-side processes, including video presentations/visits/meetings, narrower buyer outreach, and virtual due diligence. As M&A activity has picked up since the second half of 2020, a key outcome of these changes has been faster execution of deal processes.

Given the shorter process cycle that is now viewed as possible, we expect tools such as more virtual due diligence to remain widely employed even as COVID-related restrictions eventually ease. Feeding this trend will be dealmakers acting with urgency after the restart of many previously delayed processes, including buyers seeking to preemptively lock down coveted assets. This dynamic is likely to be most apparent in the U.S. in the near term, as we sense less comfort with altered diligence methods from international buyers. In addition, a shift toward more rapid execution may create an advantage for PE buyers versus certain corporates that have not yet caught up with the new approach to diligence.

We expect economic conditions in 2021 to be favorable for M&A. As the year progresses, the distribution of vaccines across the globe will hopefully lead to a broader reopening of the economy and the release of substantial pent-up demand. While 2020 represented a shift in M&A activity toward the technology and healthcare sectors, the mix of deals is likely to be more balanced in 2021, including resurgence in various services, consumer, and industrial sectors hurt by COVID-related restrictions in 2020. Although increased COVID cases could limit economic expansion in early 2021, macro research firm Strategas (a Baird company) anticipates that the recently passed fiscal stimulus package will act as an effective bridge to a period of stronger economic activity beyond Q1 in the U.S., where the recovery could outpace near-term growth in Europe and in certain Asian markets.

A strengthening economy should enhance M&A activity by boosting the confidence of corporate executives, financial sponsors, and lenders. If the combination of vaccine rollouts, added stimulus, and greater demand from consumers and businesses drives the economy as expected, the M&A market will enjoy the flip side of the heightened uncertainty that was a drag for much of 2020. In contrast with the mindset of the last several years, many dealmakers are entering 2021 with less concern about a recession being around the corner, translating to risk-on positioning in the U.S. and eventually in Europe. To the extent that economic anxiety persists, constructive monetary and fiscal policy should provide support to the economy and to upbeat sentiment in the M&A market.

While this piece focuses on the many positives that should fuel a high level of M&A activity in 2021, various headwinds could impede deal making, including challenges in bringing COVID under control, concerns about the impact of the incoming U.S. presidential administration and Congress, unresolved trade issues beyond the recent Brexit deal, or an unforeseen shock causing an equity market sell-off. In addition, targets still requiring COVID adjustments in 2021 will be scrutinized by buyers, potentially leading to disparate valuation views that prevent deals in some cases. Nevertheless, we believe the probabilities are heavily in favor of a strong M&A market during 2021.

We encourage you to contact Baird’s Global M&A team soon to discuss your M&A strategy for the new year.