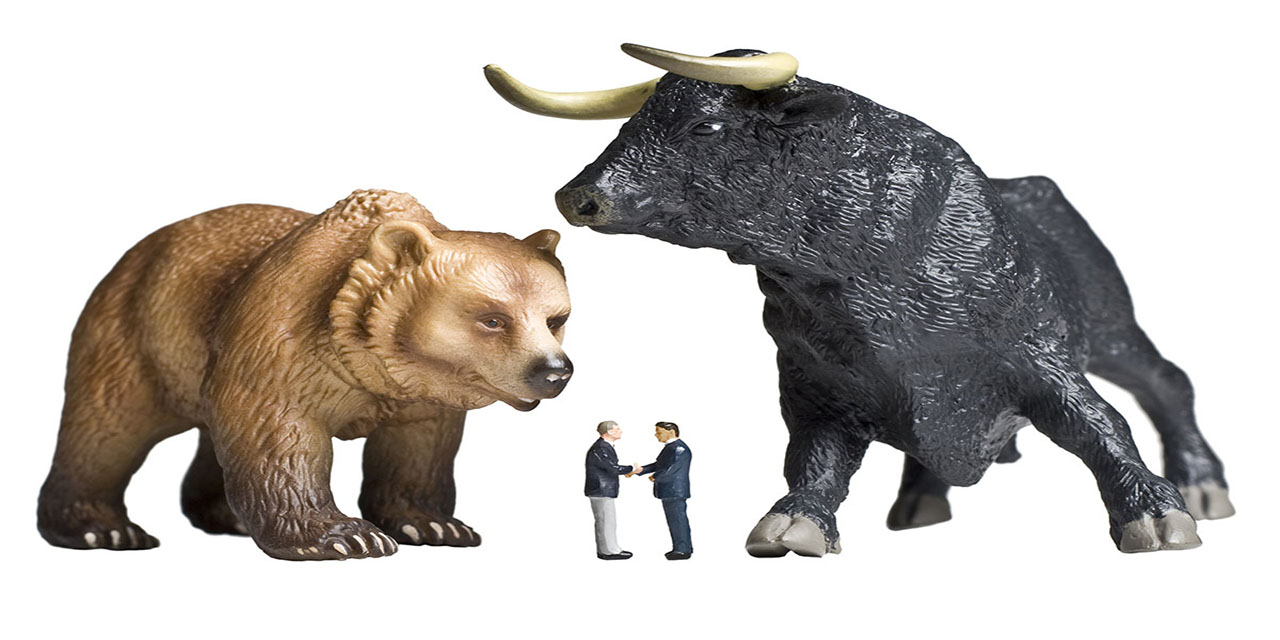 With the Federal Reserve planning to raise benchmark interest rates for the first time in more than six years later in March, Baird Global Investment Banking believes an evaluation of the potential impact on M&A is worthwhile, even amid increased uncertainty related to Russia’s invasion of Ukraine. Before providing details on our analysis, we want to acknowledge that the situation in Ukraine is extremely dynamic and that the derivative effects of the conflict with Russia are still very much unknown, with potential to impact global M&A activity.

The experience of the past two cycles indicates that upcoming rate hikes could correspond to a short-lived M&A slowdown relative to the strength of 2021. That noted, we have not seen a material impact from shifting rate policy or geopolitical turmoil in our current processes, and we continue to expect favorable fundamentals to drive healthy performance for the M&A market in 2022.

The graphic presented below summarizes deal count comparisons in various segments during the first year of the last two rate increase cycles relative to average activity levels in the preceding five years, with the following content providing further details and analysis for each category.

While we continue to anticipate a good year for the M&A market (as detailed in this 2022 M&A outlook piece) based on strong demand from financial sponsor and corporate acquirors as well as constructive credit markets, impending Fed rate increases warrant a closer look into M&A activity during the previous two rate hike cycles. We believe the insights provided here apply to M&A during periods of monetary tightening in large markets such as Europe and Asia; our analysis focuses more on U.S. M&A activity (which represented 55% of disclosed global deal value over the past decade) due to the closer tie to Fed rate actions.

As shown below, the previous two Fed rate hike cycles corresponded to a moderate downturn for M&A activity during the first year after the start of tightening. (In the charts and text, “first year” / “Year 1” / “year one” refers to the first 12 months after the initial rate increase – i.e., July 2004-June 2005 and January-December 2016.)

The historical data for both cases suggests potential for a relatively short-lived slowdown for M&A activity during 2022. Importantly, M&A transaction counts experienced significant rebounds in the second year after the first rate increase even as benchmark rates rose further, pointing to pent-up demand among buyers as well as the ability of market participants to adjust quickly to anticipated Fed actions.

With the capital markets now discounting actual and expected events as quickly as ever, a brief M&A downturn might already be underway.

For both rate increase cycles, year-one declines were concentrated among smaller deals, as larger deal activity held up well. 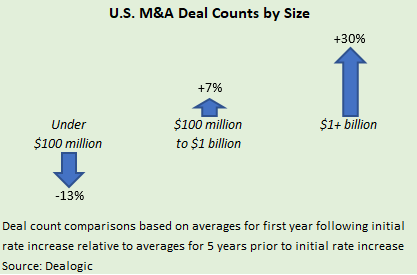 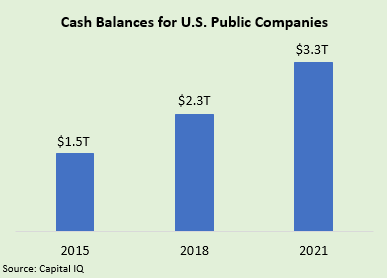 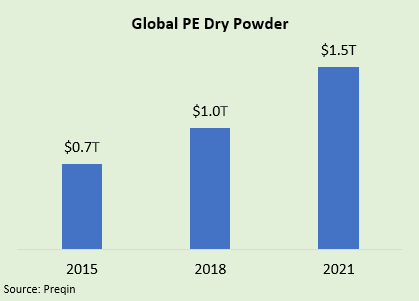 Short-term fall-offs in M&A were more prominent in certain sectors. 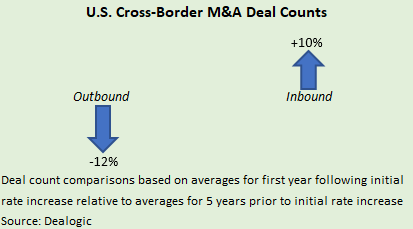 In addition to listing historical cross-border M&A patterns above, we note that the invasion of Ukraine could impact cross-border activity between the U.S. and Europe as well as prospective deals involving targets with significant European exposure due to more acute effects on the European economy in the near term.

M&A valuations held up quite well overall in year one after initial rate hikes. 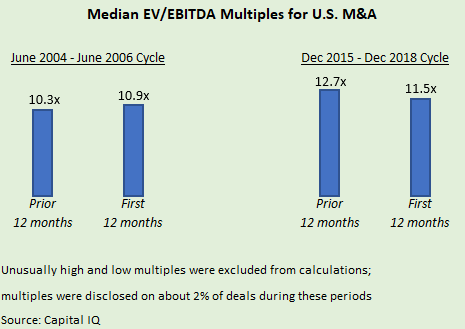 In assessing how upcoming rate hikes could impact the M&A market, we evaluated the similarities and differences of the current macroeconomic backdrop relative to the past cycles. Overall, we believe the precedent analysis is largely applicable to 2022 in view of several important commonalities.

Factors that are relatively similar include:

Important differences from past cycles include:

Based on our analysis, we believe any rate-related slowdown in the M&A market experienced during 2022 should be relatively short-lived and would create valuable buying opportunities for financial sponsors and strategic acquirors, which are well equipped to capitalize. Please contact Baird’s Global M&A team to discuss current market dynamics in further detail.