The global M&A market should continue to thrive in 2022, fueled by robust demand from well capitalized acquirors. Financial sponsors are primed for another busy year of buying and selling, while corporates will address strategic imperatives to position their businesses for post-COVID realities and emerging secular themes. Although expected to be strong, this year’s deal value metrics appear unlikely to reach the records set in 2021, when unique dynamics greatly expanded the supply of attractive targets. Throughout 2022, the combination of aggressive buyers and a more normalized target supply should further boost valuations for premium assets.

A review of the M&A market’s blowout 2021 sets the stage for expectations in the new year. Selected highlights for 2021 include: 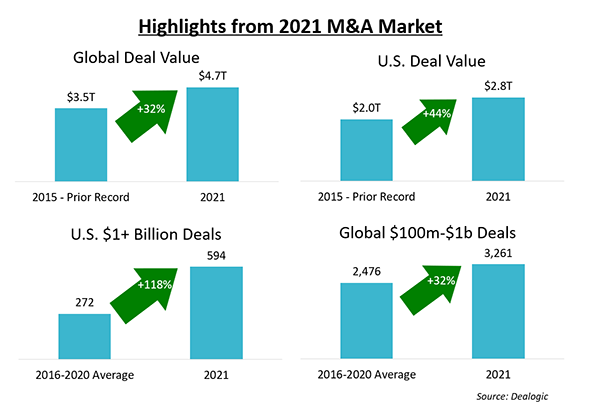 The M&A market’s banner year reflected the combination of pent-up buyer demand with the unusually high number of companies available for sale. The inflated supply of targets included many businesses whose sale processes were postponed during 2020 due to COVID. In addition, numerous assets were put on the market earlier than originally planned with an eye toward avoiding anticipated tax increases in the U.S.

While still substantial, the supply of targets should be more normalized in 2022, largely due to the M&A market experiencing less benefit from the resumption of delayed processes. Relative to 2021, this year also should see reduced impact from engagements being pulled forward due to tax considerations, although the potential for tax increases to materialize during 2022 could continue to cause a meaningful number of sellers to bring companies to the M&A market ahead of schedule. As an offset to subsiding supply tailwinds, certain factors should deepen 2022’s pool of targets, including some processes contemplated for the latter part of 2021 being deferred until this year due to overcrowding in the M&A market or based on company-specific performance pressures such as inflation, supply-chain challenges, and labor shortages. The potential for the valuation environment to remain favorable (as discussed in the next section) could also draw more targets to the M&A market.

Another outcome of last year’s deal frenzy was the significant increase in purchase price valuations realized by premier businesses, with potential for further multiple bifurcation in 2022. Strategic buyers and financial sponsors entered 2021 armed with access to massive amounts of capital, enabling their aggressive pursuit of prized assets with strong growth prospects, with these dynamics also in place as 2022 begins.

Analysis of Baird Global Investment Banking’s sellside advisory transactions demonstrates that the valuation premium achieved by top targets widened during 2021. We compared EBITDA multiples in the 75th percentile (a proxy for the highest-quality assets) to median purchase price multiples as a means of gauging the relative demand for upper-tier businesses.

Among key findings from this analysis:

We expect highly valued businesses to maintain or expand upon their valuation premiums during 2022. As noted above, the supply of M&A targets during 2022 likely will be less than the elevated levels of last year. At the same time, M&A demand among corporates and PE firms should remain near peak levels. As a result, supply-demand forces should tilt in favor of sellers, supporting purchase price valuations and potentially lifting upper-tier multiples even further. 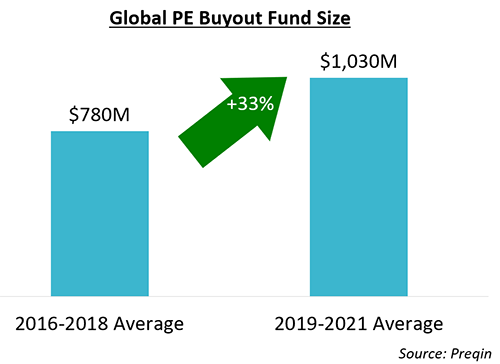 Lending markets are poised to support financings for sponsor M&A during 2022. After generating record fundraising in 2021, direct lenders should become an even larger presence in both the middle market and upmarket, including a growing number of $1+ billion unitranche financings. While the U.S. Federal Reserve recently signaled monetary policy tightening during 2022 given recent inflation trends, increases in benchmark and lending market interest rates should be gradual and would be from historically low levels.

After demonstrating renewed M&A appetite during 2021, strategic buyers should remain aggressive in pursuit of identified targets this year. Over the course of 2021, the disclosed deal value for global strategic M&A activity rose nearly 60% to a record level of $3.3 trillion. Periods with high levels of corporate M&A activity often are followed by continued strength as companies respond to deal-making within their peer groups. For example, after the prior peak year for strategic acquisitions in 2015, disclosed value for such deals in 2016 was higher than in any year from 2008 to 2014, exceeding the annual average for that period by nearly 50%.

The fundamentals are in place for strong corporate M&A demand throughout 2022. Recent surveys in the U.S. and Europe indicate that the confidence levels of corporate management teams are in the upper portion of historical ranges, reflecting relatively good visibility to upcoming results amid a constructive demand backdrop. Executives have compelling reasons to pursue targets, including to combat recent competitor M&A activity as well as to position for secular themes (e.g., AI, digitalization, IoT, sustainability) and the new normal now faced by businesses and consumers post-COVID.

Strategics are well prepared for an active year of buying due to entering 2022 extremely well capitalized:

In addition to remaining a top driver of M&A demand, corporates could become a larger source of target supply if the conglomerate breakups announced late last year signal a broader trend ahead. During Q4 2021, General Electric, Johnson & Johnson, and Toshiba were among corporate leaders announcing intentions to split into multiple companies in an effort to achieve higher overall valuations. While those planned transactions involve spin-offs, we expect many corporates to use the M&A market to achieve corporate breakups through the divestiture of business units, as in the case of Unilever recently announcing the sale of most of its global tea business to CVC Capital. Financial sponsors should continue to represent a key set of buyers for corporate assets, as sponsors were acquirors for 600+ corporate divestitures over $100 million since 2019.

Additional geographic factors should be considered in projecting M&A activity. 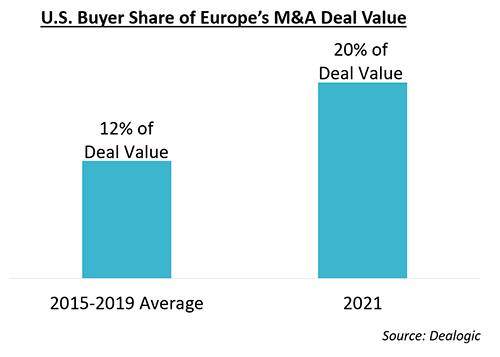 In 2022, China’s outbound buyers will seek fertile ground for deal-making after a challenging period:

Several factors that are also relevant to the M&A outlook merit discussion:

While unexpected issues are certain to arise during the year, we anticipate relatively smooth sailing for the M&A market over the course of 2022. Please contact Baird’s Global M&A team to discuss your M&A plans for the new year and over the longer term.