Be Active, Be Patient: Active Equity Management Performance May Surprise You

Much of the last decade has been marred by the fascination with the reallocation of U.S. equity investments away from actively managed accounts to passive index strategies.1 Demystifying this transition is almost impossible to factually validate given the vast dispersion of investors and their various reasons for formulating an investment strategy. Further, we've been led to believe, at least anecdotally, that investors typically mistime the market as a behavioral response to fear and greed by buying high and selling low. If history repeats itself, could flows into passive investments merely reflect typical lemming behavior, ignoring what's owned in the portfolio, valuations and subsequent investment performance? Or could it be a long sustained aberration that eventually reverses itself once investment performance between active and passive strategies diverge? Explaining this shift toward passive investing psychology has proven difficult to quantify. During this time, passive-oriented exchange traded fund (ETF) trading costs declined dramatically while the ability and simplicity of trading in one's own investment account became easier and less intimidating. In addition, the adoption of Regulation FD (fair disclosure) and the proliferation of investment information to the public may have created the perception of diminishing an active manager's ability to generate positive alpha. Others have speculated still, investors may have unknowingly invested in low active share managers (closet indexers) whose portfolios look very similar to an index of ETF.

Recent Study Reveals Key to Active Performance
A publication entitled "Patient Capital Outperformance" by Martijn Cremers and Ankur Pareek from University of Notre Dame and Rutgers Business School dated December 2015 provides some compelling evidence to suggest investors should simplify their investments by selecting high active share managers with low turnover portfolios. Simply stated, active share is the portfolio composition which differs from a respective benchmark. A high active share requires little overlap with a benchmark. A portfolio manager owns securities which are not owned in the benchmark or overweights stocks in the portfolio versus a benchmark. Low active share conversely would look like a benchmark, for example an index fund or ETF. Portfolio turnover measures the amount of time the average position is held within a portfolio. In the case referenced previously, the authors defined low turnover as an average holding period greater than two years.

The authors discovered significant alpha-generating performance resulted from the combination of high active share (proportion of a portfolio that is unique to the benchmark holdings) and holding positions for a long period of time through a cycle. Passive Investors – Know What You Own
Further, Dr. Hendrik Bessembinder from Arizona State University published a paper titled "Do Stocks Outperform Treasury Bills?" dated January 2017 highlighting individual stock returns held for 10-year rolling periods from 2026-2016 (see chart below). This distribution visually shows a large positive skew with a small number of stocks earning very large returns while conversely nearly half of stocks lost money. But with this past decade's abnormal accommodative monetary and political policies, the normal cycle of purging those companies hasn't taken place, thus these investments remain in passive investor's portfolios – like it or not. In fact, according to FactSet almost 30% of companies (#821) in the Russell 3000 index (#2914) had current annual earnings per share less than zero. In this instant gratification, real-time-information driven world one could argue investors have lost focus on the primary objective of hiring an active investment manager. An individual investor saving for retirement may have a 30+ year time horizon. One could argue pension plans, endowments and foundations have infinite time horizons. Is an active investment manager's monthly, quarterly or even annual return relative to a benchmark the driving factor to helping clients achieve investment goals? Or, is it an active manager's ability to deliver long-term excess returns including superior downside protection the ultimate goal for all investors? Consistent with the author's thesis, investors often lose sight of what ultimately drives achievement of investment goals.

About the Team
Baird Equity Asset Management's Value Equity Team has over 17 years of experience managing small/mid- and small-cap portfolios for institutions, mutual funds and high net worth investors. Portfolios are managed consistently with a long-term, high active share and low turnover philosophy. We endeavor to produce alpha for investors as a result of research-based buy and hold ideas the market has yet to embrace and incorporate into stock valuations. This consistent investment process has generated investor returns that continually outperform respective benchmarks while offering superior downside protection.

The Russell 2500 Value Index measures the performance of small-cap value segment of the U.S. equity universe. This is used for comparison to the strategy and should be considered the benchmark for this strategy. It includes those Russell 2500 Index companies with lower price-to-book ratios and lower forecasted growth values. The Russell Indices are a trademark of the Frank Russell Company. Additional indices shown are not for direct comparison to the strategy, rather they are for a demonstration of performance of the overall economy and different investment strategies. Indices are unmanaged. It is not possible to invest directly in an index.

This material is incomplete without the most recent quarterly fact sheet, which can be found here.

1Investors have reallocated hundreds of billions of dollars from actively managed stock investments (i.e. hedge funds/mutual funds) into passive-oriented investments (exchange traded funds – ETFs). This chart, courtesy of Morningstar, graphically displays this transformation. Active management flows (yellow bars) were consistently positive during the "dot-com" era of the late 1990s, and then gradually began to decline after 2006 through today. Note the transition of fund flows from active to passive occurred during the same time accommodative monetary and political policies were implemented or expanded. 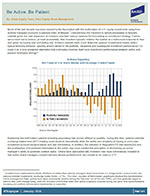