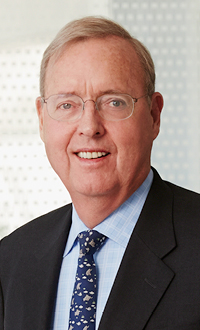 Recruited by past Baird Chairman Fred Kasten, Paul joined Baird in 1994 from Kidder Peabody & Co., bringing with him a relentless work ethic. Several of his colleagues from Kidder came with him, including current Baird President & CEO Steve Booth. When Paul became President in 1998, his vision was for Baird to be the best middle market firm in the world. He was instrumental in the formation of Baird's private equity business and helped pioneer the first expansions of Baird's now global equities platform into Europe and Asia. He engineered the buyback of the majority of Baird's outstanding shares from Northwestern Mutual in 2004, citing the importance of being able to control our own destiny. His foresight and long-term thinking kept the firm strong and stable through the depths of the Global Financial Crisis. And he consistently reinvested in our capabilities to serve clients' evolving needs.

A Champion of Culture

Paul's focus on Baird's clients was integral to his growth strategy, but he felt the quality of our people was equally important to the firm's success. His distinctive contribution to the cultural document we call The Baird Way was his "No Asshole Rule." He knew being a great place to work would enable us to attract our industry's best talent and be selective about whom we hire. He believed that would ensure the best experience for clients. Under his leadership Baird was recognized as one of the FORTUNE 100 Best Companies to Work For® every year from 2004-2020.

The idea that things could always be better drove Paul and inspired everyone around him. This was evident in his leadership of Baird and his commitment to our communities. His belief in the power of education led him to help found the board of Cristo Rey Jesuit High School in Chicago and chair the advisory council of Notre Dame Mendoza School of Business for 10 years. He also served on the boards of Teach for America – Milwaukee, Alverno College, Junior Achievement of Chicago, The United Way of Greater Milwaukee, the United Performing Arts Fund and Discovery World.

Our thoughts and prayers are with Paul's family and everyone whose lives he touched and changed for the better.

If you wish to join us in honoring Paul's legacy, donations to the Cristo Rey Jesuit High School or Tisch MS Research Center of New York are appreciated.