Baird was founded 100 years ago on the idea that our clients’ interests always come first. And while often that means helping one individual, family or corporation plan for their future, we also partner with larger clients like school districts, municipalities – and in one memorable instance, the jewel of the National Football League.

1999 was a challenging year for the Green Bay Packers, both on and off the field. The team finished the season in fourth place in the NFC Central, ending a string of six consecutive playoff appearances. Perhaps more troubling was the growing realization that playing in 43-year-old Lambeau Field was taking its toll on revenues. Members of the front office were starting to worry that without major enhancements to the stadium, the Packers – already on pace to becoming the lowest revenue-generating team in the NFL – could leave Brown County for a larger stadium with more modern amenities.

“I don’t want to think what would happen if the Packers ever moved out of Green Bay,” recounted Mark Murphy, team president and CEO. “One of the main reasons we have invested in a stadium and done all that we’ve done to Lambeau Field is to make sure that the team stays there.”

When the decision was made in January 2000 to renovate Lambeau Field, local officials had to decide how they were going to finance the $295 million price tag. In May, the Wisconsin State Legislature approved a 0.5% sales tax, pending the passage of a Brown County referendum, and authorized the creation of the Green Bay/Brown County Professional Football Stadium District. The stadium district was charged with overseeing the issuance of debt for the Lambeau Field renovation – including the selection of a financing partner. 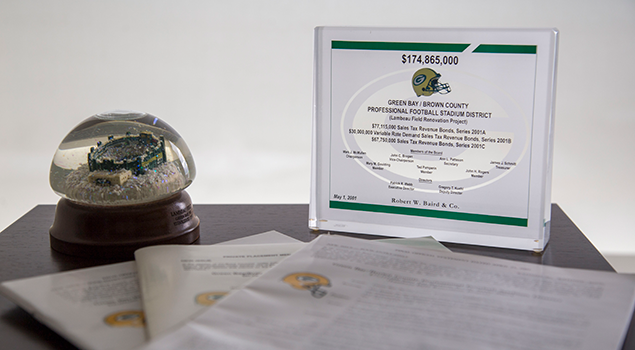 “We were getting some pressure to use a big-name firm from outside the state,” said Pat Webb, executive director of the stadium district. “From our standpoint, we wanted a firm we knew and who understood what we were about. We had worked with Baird for multiple years in Brown County, and we had confidence that with Baird we were going about it in the right way.”

Baird Public Finance bankers John Mehan and Keith Kolb worked with the stadium district to put the financing together. “It was a complicated deal,” recalled Mehan. “There are a lot of stakeholders in a project as high-profile as this one, and we had to proceed carefully if we were going to create a successful outcome for everyone.”

The financing had multiple components, including double tax-exempt, fixed-rate issues sold through Baird’s retail offices, a state trust fund loan from the Board of Commissioners and Public Lands, plus $30 million in callable, variable-rate debt.

“We had some really interesting finance issues here,” Webb said. “This was the first time we did multiple series and variable-rate debt. But we enjoyed the process, and Baird helped us along the whole way.  Plus there was such a demand for the bonds, we were able to drop the interest rate by another 5 basis points.”

Greg Kuehl, the stadium district’s program consultant, noted that the 2001 renovations played a large part in reversing the team’s financial struggles. “One of the key goals of the renovation was to convert the whole stadium from a game-day venue to a 365-days-a-year venue,” Kuehl said. “We used to be busy on game day, but with the Titletown district, ice skating, the tubing hill, now we’re busy all the time. If you come here on a Saturday before the game, the parking lot is full – even in the winter.”

Kuehl noted that the Packers – who are also celebrating their 100th anniversary in 2019 – weren’t the only ones to benefit from the renovation. “The renovation from 2001 has really been a boon for Green Bay. $100,000 houses across the street are now million-dollar homes. We’re also spurring all this growth surrounding the stadium, including a sports medicine facility, a Microsoft/Green Bay Packers tech initiative and a new exposition center and hotels. If the Packers had not renovated the stadium into a 365-days-per-year facility, I doubt any of this would have happened.”

Six years after the renovations were completed, Lambeau Field was voted Sports Illustrated’s No. 1 NFL stadium in game day atmosphere and experience, and the Sports Turf Managers Association ranked Lambeau Field as 2009’s “Field of the Year.”

“The Green Bay Packers franchise is unique, not only when compared to the rest of the NFL, but in all major professional sports organizations,” Mehan said. “These renovations were a key part to securing the Packers’ future in Green Bay, and Baird is immensely proud to be a part of it.”