Baird: Let’s start with the reversal of the Federal Reserve, where the Fed reduced rates three times this past year after raising rates in 2018. Why the change in course?

Craig: It’s important to note that the Fed’s rate cuts came in a very short period of time in the second half of the year. It’s widely understood they were trying to adjust to the current economy, which outside of the labor market had begun to slow significantly. The four rate hikes in 2018 were, in retrospect, relatively quick – there wasn’t a meeting where rates weren’t raised. As the economy began to slow in 2019, they needed to dial back Fed funds in an attempt to find an appropriately neutral rate. I think they've settled on 1.5% right now, but they had to cut rates three times to get there.

Baird: So it sounds like you don’t anticipate further cuts.

Dave: The market isn’t anticipating further rate reductions until late 2020 at the earliest. I would describe the 2019 rate cuts as “pre-reactionary” – if the Fed were to raise or lower rates in the near future, it would be based on something not currently on anybody’s radar.

Mike: And if they were to do something, they'd have to do it early – once you get past June, if they do a cut or a hike, they would be charged with interfering with the election, and they're going to want to avoid that. So our base case is no rate cut or rate hike next year.

Baird: Let’s talk about the bond market, where we’ve seen a lot of volatility this past year. What impact did it have in 2019, and do you anticipate further volatility in 2020?

Mike: What’s interesting is that while volatility this past year has been significant, it hasn’t blunted demand very much at all. 2019 saw 52 consecutive weeks of municipal fund inflows, with a cumulative inflow total pushing $94 billion, according to the Investment Company Institute. That’s the most for a calendar year on record. So there's been robust demand regardless of any perceived volatility or risk out there.

Baird: What’s behind this increased demand for munis?

Mike: I’d say we’re still feeling the effects of the change in tax law from December 2017. We've had a fundamental change in the tax code with the cap on the state and local tax deductions, and munis are going to continue to appeal to high-income earners, especially in high-tax states. Plus, munis are characterized by high credit quality and have a well-deserved reputation as a safe-haven asset. That doesn't appear to be changing any time soon.

Craig: They’re also easier to buy – individual investors can now put ETFs into their accounts, which they couldn’t do a decade ago. Plus as Mike mentioned, there are the tax advantages – for anybody that's in a high tax bracket, it's the place to be.

Baird: Are you surprised to see such a high demand for munis given the performance of the stock market?

Craig: Not really. While I think most investors appreciate the returns from their equity allocation in 2019, I think there’s some concern about economic growth going forward. And a lot of investors who remember what happened in 2008–2009 will buy bonds just for the diversification factor.

Mike: Munis are certainly a trade-up in quality. It’s a very diverse asset class, highly rated, all the things investors are looking for to balance out the potential for additional risk as the economic cycle ages.

Craig: What’s funny is when you compare munis to, say, corporate bonds. If I'm dealing in corporate bonds and I've got a single-A-rated bond, I've got a really high-quality bond. There are only two names that are still AAA in corporate bonds, and one of those has a negative outlook going forward. So from a credit risk perspective, you get much more diversity and quality in munis right now.

Baird: For years there’s been talk about wage-driven inflation that never seemed to materialize. Why hasn't inflation really taken root?

Craig: I think it's due to the labor markets being very tight, and employers having to pay more to get workers in the door. The problem is that lift in wages hasn’t impacted more established workers. One theory is that as the workforce ages, older workers care more about simply having a job – be it to give them purpose in life, to keep them active, for healthcare benefits, what have you – which is more important to them than wage increases. And we're starting to see people working well into their 70s.

Baird: Not only did muni supply experience its best October on record, but volume for the fourth quarter was at a level seen only once since the 1980s for this time of year. How has all this supply been absorbed by investors?

Mike: So far, individual investor demand has remained high, and supply has been absorbed quite well. Dealer muni positions have increased a little bit, but not nearly as much as back in 2018. It speaks to the appetite of the muni investor base right now. Individual investors make up roughly 70% of this market when you factor in holders of mutual funds and ETFs, and given the benefits this asset has for individual investors, it makes sense why the demand is there.

Baird: Do you see that continuing?

Mike: I do. However, there are a few reasons to think demand could decrease in 2020. For one, the technical backdrop might not be as favorable in 2020, as fewer bonds are scheduled to mature next year than did in 2019. Also, the rate decreases from 2019 boosted the value of existing bonds, which makes bondholders happy – if rates were to tick higher in 2020, that could result in less favorable month-end statements, as rising rates drag on total returns. But on balance, I think investors will still be interested in the municipals for the fundamental reason that it's one of the few tax-advantaged investments out there.

More broadly, one thing worth keeping an eye on is that the global economy is starting to improve. If that were to continue and foreign bond yields become more favorable, that could lessen demand from foreign investors for U.S. fixed income. But this is less of a risk to munis than other fixed income products.

Baird: What do you foresee for muni supply in 2020?

Mike: We project total gross issuance to come in around $410 billion – around $265 billion in new money and $145 billion of total refunding volume across all muni tax treatments. I expect tax-exempt new money supply to fall somewhere around $220 billion, and I think you could see tax-exempt current refunding issuance of around $90 billion, including approximately $10 billion of direct-pay Build America Bonds refunded as tax-exempt. We expect the trend of taxable advance refunding of tax-exempt issuance to continue into next year, though advance refunding activity is highly dependent on the path of interest rates. 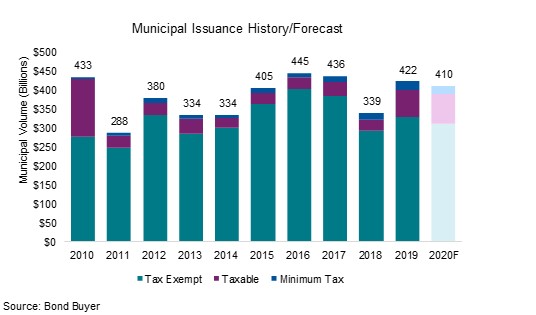 Baird: What has been your biggest surprise for 2019?

Craig: For me, I think it was the drop in interest rates. We were at almost 3% in late 2018, which means we've fallen roughly 100 basis points. That’s probably due to the perception of economic weakness and, of course, the trade wars. Markets don't like chaos. Neither do corporations that are trying to plan for 2020 and beyond. 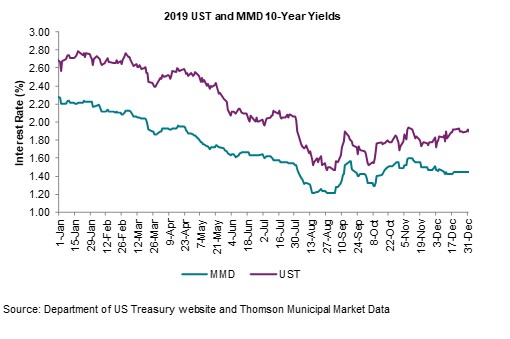 Dave: Maybe it’s not a surprise, but I’d say the media’s obsession with debating bull markets vs. bear markets. That’s just semantics. The important thing is the economy looks more stable than it did six months ago.

Dave: I don’t make predictions, but forward curves are bracing for a dull period with an expectation of slight increases and little in the way of curve movement. If Treasury yields go lower, that’s a good start to getting better returns. However, this could be negated by credit spread widening.

Mike: Overall, the improving global economic outlook is expected to lift rates overseas and relieve to some degree foreign demand of U.S. debt, which has been one factor that has driven U.S. interest rates lower. The current outlook from Baird’s strategists foresee the yield curve steepening, with 2-, 5-, 10-, and 30-year yields projected to end the year around 2%, 2.25%, 2.5%, and 2.875%, respectively.

Craig: Markets like some degree of certainty so at the very least, they can model risk going forward. There are unknowns concerning trade, the presidential and congressional elections, volatile U.S. relations with Iran and Brexit, making chaos a factor again in 2020. So even though many market participants anticipate a slight increase in rates, major reactionary swings in interest rates due to some headline, tweet or global event aren’t out of the picture either.

Dave:  To pick up on what Craig’s saying, it’s easy to identify what could influence the market, but not how much or in what direction. The 2020 presidential election absolutely could move the markets one way or another, but of course nobody can predict in which way or how much, not with any reliability. The same with the trade war. If you’re an investor, you’re probably going to be better served ignoring the noise and focusing on your actual portfolio performance.